Any Hand Will Do? 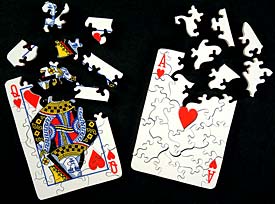 The Basics.
There are 1326 two card combinations in Texas Hold'em, including suits, 169, not counting suits. Seventy-eight are Pairs (6x13). 20 Broadway (A-10) cards and 16 of them are Suited Connectors.
You should get a pair, once every 17 hands or someone should be dealt a pair once every 17 hands, that's 16:1 that someone has a pocket pair, if you don't have one. The odds are 2.67:1 that your opponent also does not have a pocket pair.
If your two cards are not a pair, but suited, it's still 118:1 that you will not hit a flush on the flop.
You can not make a straight without a 5 or a 10. The 5 and 10 are KEY cards. It's still 76:1 against someone hitting a straight on the flop.

There are two types of hands in Texas Hold'em. A pair or better and a draw to a straight or flush. Every hand played after the flop is a contest between these two types of hands. The draws are broken down to connected cards, gapped cards, suited connectors and suited gaped cards. Anything else isn't worth looking at execpt when you are heads-up.


It helps to start with a good hand.
Top 5 hands: AA, KK, QQ, AKs, AQs (26 combinations) can be played from any position. AKs, AQs, usually need to bet 3xBB in early position, 2xBB to 3xBB in middle or late position.  AA, KK, may be best to reverse the betting process. The closer to the button, the more you bet, unless everyone is folding, as if you are trying to steal the blinds. Don't fall in love with AK or AQ, they are still only drawing hands. You will only flop an A or K 33% of the time, but an Ace, King, or Queen, about 50% of the time. You will flop a flush draw only about 10% of the time.
Group 2 hands: JJ, TT, AJs, KQs, AK (29 combinations) JJ, TT, Call in early position and middle position. Can raise in late position to steal the blinds or re-raise a small bet if everyone else has called. AJs, KQs, AK, will flop a straight, flush, or pair about 50% of the time. Call from early position or middle position, raise to steal the blinds or as a probe from late position or call raises if only one other person has raised before you.
Group 3 hands: ATs, KJs, QJs, JTs, AQ (25 combinations) Always see the flop, unless there are several raisers.
Group 4 hands: KTs, QTs, J9s, T9s, 98s, AJ, KQ (38 combinations)
Limp in unless you are on the button.
Middle Low Pocket Pairs: 99, 88, 77, 66 (16 combinations) Call in middle to late position or with less than 3 players.
Low Pocket Pairs: 55, 44, 33, 22 (16 combinations) Call in late position, or with only 2 or less players in the hand.


Trap hands
Use when you have a really strong hand and someone else has a lesser hand they can’t lay down. The trap is usually sprung by the flop. Any pre-flop 2 or 3 gaped middle cards; like 9-6, 8-5, or small pairs that have hit a set or better.  Only call small bets, if you don’t hit the flop, don’t bet unless in position, must always be played cheaply, fold if not hit on the flop.
Against good players, large bets like 6xBB to 2x pot or more, from late position, when all else have folded, may be a trap with AA,KK, otherwise it’s someone trying to steal the blinds with a weak hand.


Pre-FlopHands
High pairs: (AA, KK, QQ): vary from call to big raise (3x-5x); re-raise 3x the raiser,  re-raise the re-raiser.
KK will flop an over card about 20% of the time, QQ about 33%, each successive lower card about 12% greater than the last.
(AA,KK) Can slow play a tight table or against loose players, but always re-raise the raiser at least 2 times their raise.
(QQ) vary your raises; call, do not re-raise unless heads-up only or the raise was small
Middle pairs: (JJ,TT): Raise 2x,3x, do not call or slow play; raise only, do not re-raise, unless heads-up. TT will see more action and likely to flop possible straight draws, due to being a KEY card.
Mid-Low Pairs: (99, 88, 77, 66): Raise 1x-2x, call small raises, do not re-raise. Likely to flop straight draws.
Low Pairs: (55, 44, 33, 22) Raise 1x-2x in early position, call in Middle to Late Position; Fold large raises.
There is a 10% chance Pairs will make a SET by the river make, 16% for 2 Pair, 1% for a Full House, and about .25% for 4 of a Kind.
AK,AQ,AJ (suited or un-suited): Raise 2x-3x, call small to medium raises, fold to large raises except for heads-up, then call. Good hands to raise in the blinds, but only 1x BB.
AT-A6 (suited): Call all small bets, raise in early position 1x, fold all large bets, except when heads up.
AT-A6 (un-suited): Call all small bets, don't raise or re-raise, fold all large bets, except when heads up. Try to see the flop cheaply. Call in early position, can call small raises if less than 3 other players.
A5-A2 (suited &amp; un-suited); Call all small bets, fold 2x+ raises and large bets, except when heads up. Suited has more options than un-suited. Call suited cards in early position, fold if raised.

Move up a group if someone raises or bets 3x or more before you, unless you are heads-up

Mental Exercise: Remember the last 3 flop textures. The probability is higher of a favorable flop hitting your hand if your hand is the opposite of the previous flops. (Gambler's Fallacy, but you will be surprised at how often it happens)