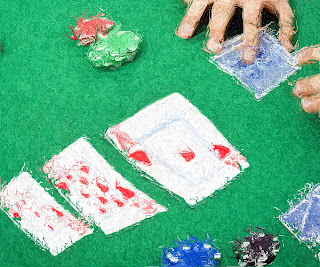 If you have every watched poker on TV, you know they don't show every hand played. This makes it hard for new players to learn what hand to play and when to play them and how to play them. One of the chief reasons I think there are more aggressive players in the games than a few years ago. Gus Hanson takes you through most, not all, of the hands he was dealt when he won the Aussie Poker Millions tournament in 2007.

I'm about a third of the way through and it looks like Gus is really only playing in hands he thinks he can get heads up in, unless he has a top hand. Most of the hands he plays are played aggressively, from any position. The players appear to be less aggressive than you see on TV, which could be misleading, but may be due to not really knowing about the hands he is not in.

Still, it shows how aggression will win pots that would be lost if you didn't try to reduce the field and try to get heads up. Which leads to some thinking about reading the board again and what you are likely up against.

I like to rate the board, especially when I'm not in the hand, and see if I can figure out who has what. I rate flops from A+ to C, because even what some might consider a D type of nothing flop can lead to a monster on the end, but most players aren't going to go to the Turn or River without a hand that has the potential to win, unless you like to gamble or you're a Mental Midget.

The Turn and the River can change anything, but the right play on the Flop may cut out the draws that can win on the last two streets.