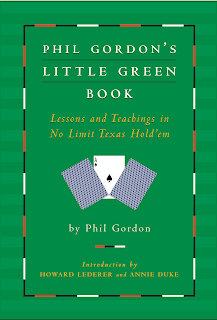 I have all of Phil Gordon's books, including Poker: The Real Deal, one of my first poker books. His "little books", Green, Black, Gold and Blue, show his, as well as the game's evolution. They all have some good math basics, as well has his own "tricks", like how to play Ax. His best tip is the Gordon Pair Principle, about the odds someone is holding a better pair preflop.
Here are a few of the tips from the Little Green Book.

Psychology: Timing of Bets
Try to always take about the same amount of time to consider options and take action on a hand.  Not too fast, not too slow.
(use a clock or watch to vary your time; like when the second hand is between 10 and 12, act
faster or way slower, like you are thinking about your outs or  may or may not have the nuts.)

Beating Tight and Passive Players
Tight/Passive players play so few hands that, while they may hit the flop, Phil says 35% with AK,
I think it's more likely they will only play a hand maybe once out of 9 hands, which means about 35 hands have to be played before they hit it. You should be able to pick up several small pots against them.
OK, what's tight and what's passive.
Tight players only play the top 10 hands and even then bet weakly on the bottom half of that spectrum.
Passive players will play a few more hands, but quickly fold to any action if they didn't hit their hand.
Raises, Re-raises, and continuation bets will usually get either of them to fold.

Beating Loose Players
Play tight, wait for great flops that hit your hand, give them hope and lots of rope.

Implied Tilt Odds
You want to play against players that are easily emotional about either their bad beats or your bad beats and any hand they suck out on. Playing into their emotional outbursts and bad plays, even with a marginal hand, will eliminate them.

Tells: When they look at my chips.
Usually means they have a good hand and they think I'm weak. If you catch a monster hand, you can over-bet the pot or check-raise.

When they reach for chips
Kind of depends on who's looking. If they reach for chips after looking at my chips, but I bet first, make the raise. If they are not looking at my chips or anyone else's chips, they have something, but it's my turn to bet, I'll bet my hand strength depending on how many chips they appear to be grabbing and look for a pause in their grab, which means they aren't as strong as they wanted to project.

The Quick Call
Players that quickly play the flop, usually a minimum bet, frequently have a drawing hand. If they had a good hand, the top pair or better, they would be considering what to raise. If they missed the flop, they are thinking about folding or bluffing, which takes a little more thought.

The Slow Call
It's usually a raise with a strong hand or a fold with a weak hand. Calling, after a long pause, could be a ploy to suck you into a monster hand or a draw to the nuts.

Texture: After the Flop
What cards are in play, how will they interact with other players hands or hand ranges and what bet is likely to come based on the board texture. Most bets are likely to be 25% to 100% of the pot. Any less is usually a missed fishing expedition; any more is either a poor bet by a weak player with the nuts or a bluff at a nut draw or 2nd top pair. The more players still in the hand, the more likely someone has at least top pair.

Living up the "Weak means Strong and Strong means Weak" philosophy, Phil leans toward making weaker continuation bets with strong hands in order to entice a player to call. With weak starting hands that have good outs but miss the flop or maybe hit 3rd top pair, betting half the pot usually get slightly better hands to fold, top pair will usually re-raise though, so it's an easy fold. With medium strength hands, betting half the pot to 2/3 of the pot gets some players with slightly better hands to fold and players with Nut potential, but worse hands, to call.

After the Turn and a scare card hits
Phil likes to just check if he had the lead but it didn't help him and call a small or continuation bet, he's not liking a check-raise here.
If it didn't hit you, It may have hit them, how many players still in the hand should determine how scary the card is. If it's only you and one other player, make a continuation bet, it's still a game of fish, so you have to ask if it hit them, if you just check, they would most likely make a continuation or value bet which would cause you to likely fold. If there is more than one other player in the hand, it either hit them or helped them, if it didn't help you, you have to check, or if you do have a good hand or the nuts, check raise.

It's all about the odds to improve.
Based pretty much on your outs.
9 to 10 outs, like a high flush draw, maybe a nut flush draw, is about a 35-45% chance of hitting your draw, you should bet about half the pot, if you're the first to act.
4 to 6 outs, like and inside draw to 2 over cards, is about a 15-20% chance. Phil likes to bet about 2/3 the pot, but I think you need at least one Broadway card to even consider that bet and you need  to only have one other player in the hand.
Less than 4 outs is a real gamble. The newer professional and amature poker players are much more aggressive now and love to gamble. Phil likes a pot size bet here, to take the pot down, but I think position is the relevant factor here and knowing what type of player you are up against and it can only be one, two or more players are likely to have you beat regardless of position.

Tournament Strategies: Stealing the Blinds
Stealing the blinds is a critical element in tournaments. At a full table, you need an above average stack size to steal one every 13 hands or so, and position will likely make a more optimal timing of once every 16 or more hands a better option. In a six handed or less table, you should only be trying to steal from the last three seats anyway.
A blatant thief is easily caught.
It's hard to steal the blinds from "Next to BET" instead of "First to Bet", when first to bet actually raised. You have to not only be in position, but have a playable hand to commit grand larceny. You also have to have that gut feeling that they are actually trying to steal the blinds, which means they have to be no more that two seats on your right. More than two seats away is not likely a steal, but some type of good to great hand. If you're the button, then there are two seats on your right that are stealing seats, the Hi-Jack seat and the Grand Larceny seat.
BB-SB-BTN-CO-HJ-GL-M4-E3-E2-UG

The Green, Black, Gold and Blue books from Phil Gordon. 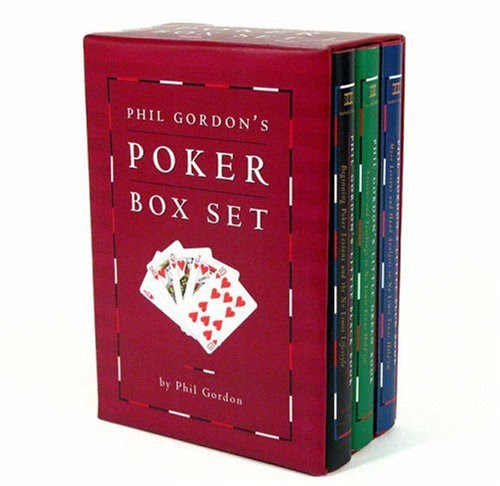