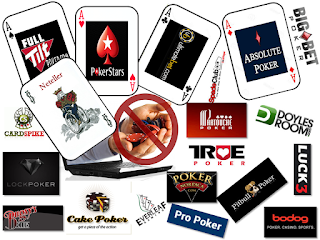 It's because of Neteller and the online poker sites during poker's Black Friday, that I will most likely not be playing online poker anytime soon in the US.

I am probably in the minority, but unless I can walk into the place where I deposited my money so I can then withdraw it, in person, I can't trust any online site to pay me what I want when I want it.

I actually would trust most of the casinos in Vegas or the top 5 cardrooms in Los Angeles, if I could make deposits and withdrawals at the casino. Of course, I'd probably just use the cash to play live though, but at least I would have had it in my hand or on the table where I could see and touch it.

Jan 17, 2007
The United States crackdown on internet gambling took another twist after the two founders of Neteller, an online payment company, were charged with money-laundering and the company was accused of facilitating "illegal financial transactions".

John Lefebvre, 55, and Steve Lawrence, 46, were charged by the assistant US district attorney in the southern district of New York less than 24 hours after they were arrested in Malibu and the United States Virgin Islands.
The shares of Neteller have slid 80pc in the past 12 months. They were suspended yesterday at 176p.

Feb 7, 2007
Now the Web site for the company is advising customers that all withdrawals have been blocked and the funds are being maintained in trust on the customer's' behalf while Neteller works to resolve the issues.
Neteller has not disclosed how much money has been frozen and has refused to disclose or confirm any details of the freeze, as has a spokesperson from the Department of Justice.

March 21, 2007
In more good news for the online gambling industry, Neteller today announced that it has reached an agreement with the US Department of Justice (DOJ) to return funds belonging to American players that had been frozen at the DOJ's request .

Neteller, the online ewallet company that at one time provided payment processing services for over 85 per cent of the online gambling industry, has been in legal limbo since the DOJ arrested two former executives on conspiracy and money laundering charges back in January. Neteller became the primary funding source for the online companies that continued to service the American market after the passage of the Unlawful Internet Gambling Enforcement Act (UIGEA) drove the American credit card industry out of the market.

The press release notes that Neteller has signed agreements with the DOJ and the forensic auditing group Navigant. The agreement provides a 75-day timeline under which Neteller will work out a plan to return funds in an orderly manner to its one-time US customers.

I eventually got my money back and after a while decided to take a try at PokerStars, FullTilt, Ultimate Bet Poker, and Absolute Poker.