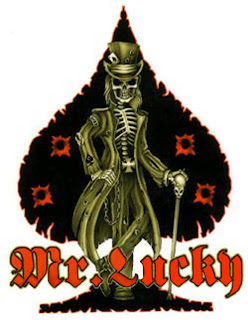 Luck will find you if you go looking for it, both the good and the bad, mostly the bad!
Mental Exercise:
Note who is playing the most hands, who is playing the least hands.
What is the average raise by the loose aggressive players?
Who only calls?
Who folds to raises?
Who is aggressive against draws?

Aggression
The risk of never challenging is always greater than the risk of challenging.
“In a balance of mutual terror, whoever acts first has the advantage!”
Being aggressive before the turn or river, might have caused your opponent to fold, instead of winning on the turn or at the river.

Loose Aggressive players try to manufacture luck by playing a lot of hands. They typically raise out of position when first to play, knowing that the tight passive players are likely to fold their marginal hands. They usually raise around 3 big blinds preflop, which also shuts down the players who have bought in for less than 50 big blinds and players who have less than 50 big blinds.
Loose Aggressive players want action and will put in 10% of their stack with their marginal hands, middle connected and/or suited hands. When in position, you have to reraise these players with your top 15 hands and call with your top 25 hands. Out of position it's best to just call your top 15 to 20 hands and raise with your top 15 hands.

Experienced tournament players are likely to make a bluffing bet on the river, if they think the other player is a weak or timid player. A bluffing raise is more likely to be used if an experienced player thinks the other player is more concerned about conserving chips in the middle of the tournament.
If sandwiched between an All-in raise and a previous raiser, when an over card comes on the Flop, the raiser is likely to fold a smaller pair to a re-raise. A Semi-bluff should be used more than out-right bluffs, early in tournaments.

The best way to get lucky, is to keep your head in the game!
You don't get lucky before the flop.
All luck happens after the flop.
After the flop you must keep this in mind.

Your head can get into a kind of fog when you keep getting marginal hands or no playable hands for a couple of hours at a loose table.When this happens, it's best to take a walk for a few hands, which may help clear your mind a little.

I see a lot of players that change seats or even tables when the cards turn cold. I don't subscribe to the notion that if I change my seat, it will change my luck. You make your own luck, which is what those loose aggressive players are trying to do anyway by playing 80% of the hands and raising 50% or more with them, regardless of position. I love those players, when my head is in the game. 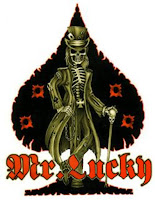