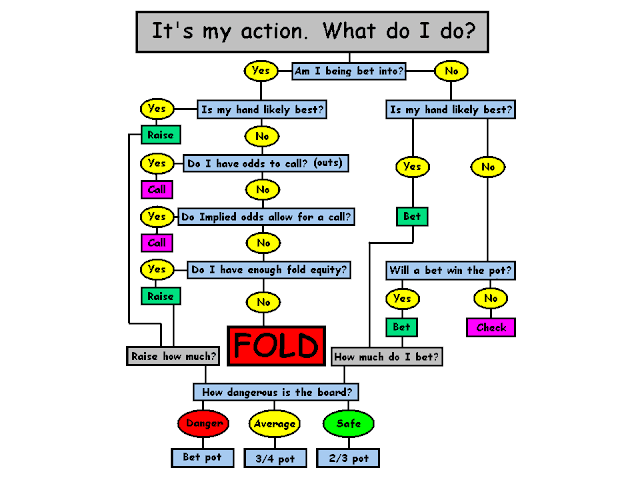 Ed Miller Explores Ten Situations On One Flop
http://www.cardplayer.com/poker-news/16138-poker-strategy-with-ed-miller-one-flop-ten-hands
What happened pre-flop?
You have a $1,000 stack, and most of your opponents have you covered. Everyone folds to the player two off the button who opens for $30, [a $20 raise, 2x BB, with $5/$10 blinds.] You call on the button. The blinds fold. It’s two players to the flop, and the pot is $75.
[Seat 8 could have anything depending on the type of player. Tight players would most likely raise 3xBB with AA-TT, any raise Minimum to 2xBB is more likely AK to AJ, possibly KQ or QJ, Loose players would probably raise 3xBB with anything if everyone folded to him. Selective Aggressive and Solid players are more likely to raise 2BB with any good suited connectors or trying to trap with over pairs, below AA. The flop is the real decision maker for most players.]
10♣  6♦  3♠ (no flushes or straights made, best non-paired hand is a straight on the turn or flush on the river)
Top set, I would just call. Slow playing top set is natural, since the holding cripples the deck for our opponent. On this board, I will be raising nearly all my value hands, so it’s nice to still be able to threaten the nuts when I just call the flop. Some players would look at the possible draws and think it’s too dangerous to slow play. With most hands we aren't slow playing. Just this one.
Middle set is a raise. We’re raising a lot of hands, so we definitely should raise bottom and middle set. If we catch our opponent with an overpair or A-10, we could easily win stacks.
[Over pairs]
Do not always reraise (over pairs like Q-Q) preflop in position, and one reason I don’t is that I like to have this hand in my range on flops like this one. This is a flop raise. If I’m going to apply pressure with bluffs, I need to have real hands sometimes also.
[Two over cards, Ace high]
Call. We have two overcards, a backdoor-flush draw to the queen, and possible ace-high showdown value. It’s not a great hand, but recall that our strategy has us folding infrequently because of our structural advantages in the pot. I prefer calling with this hand over bluffing, as calling preserves the showdown value, and we’ll almost never end the hand with the nuts, so there’s no value to building a pot.
[Drawing hands]
A wrong-suited gutshot to the nuts. This is a hand I’d raise. Again, we’re raising frequently to push our positional advantage and possibly to punish our opponent for continuation betting too many hands. Gutshots to the nuts make good bluff-raising hands in general, as they typically have no showdown value, and they also can justify building the pot since you will end up occasionally stacking an opponent when you hit the nuts. If you get reraised, you fold.
Top pair with a marginal kicker. This is a straightforward call. If this pot blows up, your hand is not good. It’s best suited to pick off bluffs and to protect your calling range (since you’re also calling with unpaired hands).
Middle pair with 2 card backdoor-flush and low end 2 card straight draws. This is a hand I might have reraised preflop. But if I didn’t, I’m likely raising it now. The potential to make three sixes or the backdoor draws add value to this hand in a big pot. Many turn cards add equity to this hand — any spade and any six through deuce. If our opponent calls the flop raise, we will frequently get to bet big on the turn with a decent chance of drawing out when called.
Bottom pair with the nut-flush 2 card draw. Many people raise this hand reflexively, but I prefer to call here. If you get this hand all-in on the flop, you’re likely up against a set or a big overpair — a range against which you are a slight dog.
[Gapped Low pairs, between middle pair and low pair, such as 55 or 44]
This is the type of hand I fold. There’s a small amount of showdown value, but that’s it. The draw isn’t strong enough to risk a big pot. And it can’t handle a second bet. I also fold hands that need 2 cards to complete a straight or flush.
Backdoor 2 card flush and 2 card straight draws with an over card. I would likely call. The backdoor draws mean a lot of turn cards will justify aggression. I’m defending a hand this weak because I have the structural advantage (position), and in most cases I’m not going to let this pot go without a fight. ♠
About Flop Textures part 1 part 2