Bluff or Semi-Bluff in No Limit Holdem? Part 1 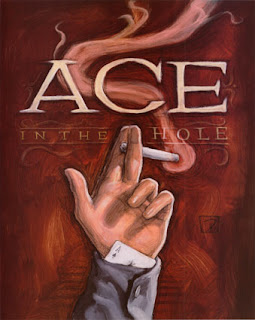 Re-reading "The Theory of Poker" by David Sklansky.

OK, I still hate to bluff, but found out that what I really hate is the 'pure' bluff. A pure bluff is a bet, which if called, has no chance of winning in a showdown. A semi-bluff is a bet with more cards to come. A semi-bluff, when called, may not be the best hand, but has a reasonable chance of becoming the best hand. The main thing to eliminate from your game is the gamble factor, don't be a Mental Midget. There is no semi-bluff you can make on the river, with no cards to come, it's a pure bluff. Pros look for the best opportunity to maximize the value of their hand. That's why a good player is easier to bluff against than a poor player. A good player can recognize when someone may be bluffing, but because a good player will usually only semi-bluff, they can more easily represent a good hand and make it believable. A poor player will just play to the river without realizing that their hand may not be the best, but can't let it go, where a good player can fold when a reasonable bluff has been made. We need to re-evaluate when to make the semi-bluff. Playing too tight by not bluffing at some time in the game only makes your strong hands worth less in pot equity. Don't semi-bluff if you are sure you are going to be called. Betting for value is clearly incorrect when you put more money in the pot with a hand you know to be the underdog. If you think your chances of getting away with the bluff are greater than the pot odds, you should go for it. You should bet if you know the opponent will fold with enough frequency, to make the bluff profitable. It's important that bluffs are random, don't always bluff just because of the pot odds. The weaker you think your opponents hand is, the more likely your bluff will work. The stronger your opponent thinks your hand is, the more likely your bluff will work. The larger the pot, the more likely a bluff will be called.

Randomizing bluffs allows a tight player to take the thought out of the bluff. It also allows both tight players and loose aggressive players to appear to be selective aggressive players. Opponents might be able to outguess a player because they remember patterns of play. Randomizing bluffs forces them to try to outguess an uncontrolled action, which is impossible. Sklansky suggests using a card, like the King of spades as the random trigger. The normal bluffs, combined with a random bluff, are more deceptive. Sklansky even goes farther by using 5 cards which includes all four Jacks. The game he played in this example was lo-ball, like Razz, in which those high cards are generally no good to win with. Using a card in Hold'em that generally doesn't help anyone, may be a good choice. The cards would be added to the number of outs to make the hand look better to an opponent. When the random card appears on the flop, you would bet, even if it didn't help your hand. If the hand fit the board, like for a straight or flush draw, it would appear that it helped your hand. Harrington suggests using a watch with a second hand. When the second hand is between 10 and 12, you could bluff. On a digital watch you could bluff when the last second is a 9 or when it matched one of the flopped cards, duece to nine. Again, only bluff good players who may fold to a bluff and it increases your odds of winning. Even if you lose, your odds are better on the hands that do win, because you are more likely to be called by the second best hand. The opponent can never tell when you are bluffing, because it's random.

In deciding to bluff, first determine the odds of making your hand. Then determine the odds your opponent is getting on the bet. Then you must randomly bluff in such a way that the odds against your bluffing are identical to your opponent's pot odds. If you have a 20% chance of making your hand and your opponent is getting 5 to 1 odds, the ratio of your good hands, 20%, to your bluffs, should be 5 to 1. 20/5 = 4. You should bluff 4% of the time, a ratio of 20% to 4% would equal 5 to 1. If there are 10 outs, you would pick 2 unseen cards as the random bluff, to give you the 5 to 1 odds needed. It doesn't have to be exact, but the closer you are to the exact ratio the better. In game theory, when you bluff this way, you take optimum advantage of the situation.

Bluffing against 2 or more players

It's rarely correct to bluff 2 or more players when all the cards are out. The chances the bluff will succeed decrease geometrically with each player in the pot. In most bluffing situations against more than one players the probablilties that each player will fold are not independant. Position and player types have to be factored in because players who might fold in one position might not fold in another. Betting to reduce the field is not a bluff. When there is a caller ahead of you, the caller and the original bettor cannot both be bluffing. When you have a minimum to near-minimum raising hand and the player before you, who has the same standards as you, raises, then his hand is probably better than yours. It takes a better hand to call a raise than to raise a call.