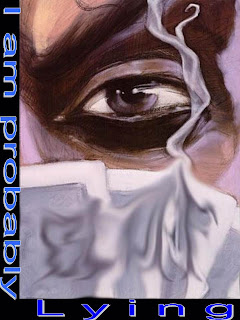 Bluffing ----- do you really need to bluff?
I hate bluffing and have always hated bluffing. I am currently reading Poker Wizards by Warwick Dunnett. The section with Chris "Jesus" Ferguson, one of my favorite players to watch, talks about the need to bluff.

Ferguson writes, "If I never bluff, my opponents are going to figure that out and only call me when they have a hand that they think can beat me. Therefore, I am really losing money with my good hands because I only get called when I am beaten. If I bluff too often, I will get called too often, and end up losing more money with my bluffs than I make from my good hands".

Reasons to Bluff are the same as the reasons to raise.
Reduce the number of players in the hand and/or Steal the Blinds. Generally good players will rarely bluff, unless the table is tight.

Player classifications prior to the first hand being dealt.
Rate each player as a 1 (Passive) or 2 (Aggressive).
After a few hands see if the classification still holds and then sub-classify them, which will give you an aggression factor.

See if the maniac stays true to form or was really an aggressive type that got some great hands early in the game. There are many Mental Midgets in fast card room tournaments and on-line play, they have no respect for the game.

Bluff Poker
Harrington’s Law on Bluffing: “The probability someone is bluffing when he shoves a big bet into the pot is at least 10%”, (until the final table).

The probability of bluffing may be based on position, relative to the number of players at the table and the number of players in the pot. The "Button" and "Cutoff" players could have a 90% probability of bluffing, if there are no other players in the hand and decreasing 10% for each player before them in an unraised pot and another 10% if the pot has been raised. If it's been re-raised, the chance that someone is bluffing could be down to less than 10%.

Post-flop bluffing probability
The more players in the hand, the less likely anyone is bluffing, unless its the chip leader or a short stack or of course the Mental Midget.

Pre-flop bluffing:
Early Positions (UG) Under the Gun, 4th and 5th positions.
The UG &amp; early position raising more than the standard 3 times the big blind is more likely to be a bluff. They would most likely slow play or make a normal raise with Top 10 hands. They are likely to just call or raise more than 3 times the big blind with Type 3 or 4 hands. Going All-in is either a bluff or knowing they will end up All-in anyway if they are short stacked. Even Mental Midgets are not likely to over play the top 10 hands, but any other hand is open season for a large bet. The most likely hands for them to bluff are middle to low pairs and middle connectors or any suited Ace with a middle to low card.

Middle Positions (6th/7th)
Middle Position payers could be playing the top 15 hands normally but bluff lesser hands if no one is in the hand before them. Middle Position players are more likely to be squeezed between good hands if they are not first to bet. They are more likely to get trapped in a difficult situation, when you are trying to call a bet by a player in Early Position, but are getting raised or have a very real threat of being raised by another opponent in Late Position. This is dangerous because you may be wanting to slow down the action when you are holding a marginal hand or are wary of your opponent acting behind you in Late Position, but the Early Position player is either too aggressive or has a good hand himself and is forcing you to commit more chips to the hand. Middle Position may be the hardest place to try a bluff.

Late Positions (8th-Raising/Button/Cutoff)
Late Position players are only limited by how many players got in the hand before them and if anyone raised. With no raises and everyone else mucking, they can easily bluff with just about anything, especially if the blinds are weak players. If there are a few callers they can raise with almost any of the top 20 hands. If the pot was raised with a standard raise, they are likely to bluff only if there are weak callers and the raiser is a loose aggressive player or a Mental Midget.
Blinds
It's amazing to me how irate aggressive players become if someone raised their blinds. The more irate they are, the more vocal they are, the more likely they are bluffing or pretending, because they have a strong hand, especially if there is only one or two players left in the hand.

Post-Flop bluffing
Scare cards are likely to induce bluffing if either no one has bet or the Loose Aggressive or Mental Midget thinks no one has caught anything and wants to represent a nut hand. The more players in the hand, the less likely someone who bluffs is going to succeed.

Early Positions (1st, 2nd and 3rd positions)
Early Position raising more than 2 times the pot is more likely to be a bluff. They would still more likely slow play or make a normal raise with a set or higher. They are likely to just call or raise half the pot with top pair or a nut draw. Going All-in is either a bluff or knowing they will end up All-in anyway if they are short stacked.
Even Mental Midgets are not likely to over play a set or higher, but any other hand is open season for a larger bet. The most likely hands for them to bluff are middle to low pairs but representing top pair or nut draws with an Ace or King on the board.

Middle Positions (4th, 5th, 6th &amp; 7th positions)
Middle Position payers are still vulnerable to being squeezed out but a bluff here could cause good drawing hands to fold. This may also be the best place for those Mental Midgets to attack if players before them are checking.

Late Positions (8th-Raising/Cutoff/Button)
Most likely to make a play if there are few still in the hand and everyone checked to them. May be a good place to bluff if someone made a small bet and it looks like the rest will fold.
The goal is to put the pressure on, by getting heads up with a good hand against a weak player, the winning hand against a good but second best hand or challenge the Mental Midgets.

Final Table
This is where bluffing becomes a fine art.
Now you are in-the-money and it's all about finishing as high as you can. The chance that someone is bluffing goes anywhere from 30% to 60%, increasing by another 10% according to the type of player you are against and your stack size relative to the average stack size. It's still going to be determined by the amount of the bet or raise in relation to the flop. If the bet or raise is un-reasonable, because the flop doesn't look like it helped anyone or the board is scary, then either someone is bluffing or they have a hand that can be beat at the river. It's rare that a bluffer will fire two bluffing bets (bullets), like a raise and re-raise or raising the flop and turn, with absolutely nothing. But, if it's going to happen, it will happen at the final table, at least once.