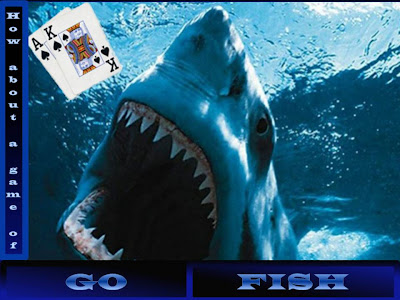 Remember the good old days as a kid and playing Go Fish with your brothers, sisters, friends and family?

Poker is the same game, but with a twist.

In the game of Go Fish, you are looking at cards in your hand and asking someone if they have one. If they do, they have to give all of them to you and if they don't then everyone else playing knows what you have in your hand and can ask for it. In the kids’ version of Go Fish, you could not lie. You could not ask for cards you did not have and they had to tell the truth. If they had some they would give them to you or tell you to "Go Fish".

Poker, on the other hand, is all about lying. The big difference is that you are not asking what specific cards someone is holding. Poker is a game where players play different ranges of cards. Loose players may play a large range of cards and tight players may play a narrow range of cards, all depending on how much they like to gamble, or how much risk their money's worth.

When you make a bet, you are actually asking a question of your opponents. If you are the first one to bet pre-flop, you are really asking the players if they can beat the range of cards you are representing. That's why poker players are fond of saying, "you don't play the cards, you play the player". No one knows what anyone else has. After a time they know pretty much which cards you like to play and how those cards may vary from position to position at the table.

The game gets interesting according the various types of players you are playing against. Loose players gamble more and tight players gamble less, but both players have to lie from time to time. Loose players lie more, based on the fact that they are involved in lots of hands. But on a percentage basis, a tight player can actually be lying more just by playing slightly more hands.

It's even more interesting when you factor in the probability of hands into the number of liars playing a hand. If the fact that, at a full table, someone will get pocket pairs once every 16 hands, then when a normal 3 times the big blind bet is made and 2 call and one raises, then more than one person is representing that they have pocket pairs, which means that there is at least a better than 50% chance someone is lying.

Of course, poker players don't lie, they bluff! They can bluff meekly or they can be an extreme bluffer and bluff often.

After the flop is where the real art of the game comes into play. Each bet then is a series of questions about who has what and who believes what they are being told. If you believe the person who bet first had a good playable hand before the flop, is it still a winning hand after the flop?

Since the experts tell you that most hands miss the flop, then the question is which of those liars with pocket pairs will believe someone hit their hand and now their hand is beaten by a higher pair or a better made hand? And if they weren't lying, can you get them to believe you actually did hit your hand or that you really had a real pocket pair pre-flop and now you have a set or better?

That's what makes poker so great. You get to ask the players what they have and they will tell you. It doesn't make any difference if it's the stoic old player that never talks or the brash young player that not only talks but animates the antics of an answer to the world. They do this by folding or betting. They do this by not saying a word, or by saying loudly, many words. But after the silence or the noise, comes the answer in the form of a bet or non-bet.

It usually isn't until you reach the river that you learn who bluffed or who lied and who didn't.

I think I'll start telling people to "Go Fish", more often, then make my bet or non-bet. Which will start to mean, “I have a great hand so let’s go to the river - ALL-IN"!