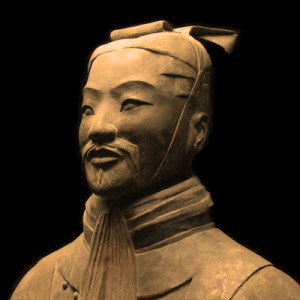 I was watching one of the poker shows on TV, I try to record most of them. One of the announcers asked the other, "I wonder what The Art of War (Sun-Tzu) has to say about limping?"
Being a advocate of The Art of War and Poker, I thought I'd take a look at it. There has already been a good book on the subject written by David Apostolico, Tournament Poker and the Art of War, and there is also a web site devoted to it. Sun Tzu's Art of Poker

From "The Art of War" by Sun-Tzu
In battle, there are not more than two methods of attack:
the direct -betting/raising- and the indirect -checking/limping-;
These two in combination give rise to an endless series of maneuvers.
The direct and the indirect lead on to each other in turn.

It is like moving in a circle — you never come to an end.
(It's also an effective act of randomness to keep your opponent off balance.)

Masking strength with weakness is effected by tactical dispositions.
Thus one who is skillful at keeping the enemy on the move maintains deceitful appearances, according to which the enemy will act.
He sacrifices something, (so) the enemy may snatch at it.
If we wish to fight, the enemy can be forced to an engagement even though he (is) sheltered behind a high rampart and a deep ditch -a wall of chips-. All we need do is attack some other place that he will be obliged to relieve (defend).
If we do not wish to fight, we can prevent the enemy from engaging us even though the lines of our encampment be merely traced out on the ground. All we need do is to throw something odd and unaccountable in his way -Randomness.
By holding out baits -limping/slow playing-, he keeps him on the march; then with a body of picked men he lies in wait for him.
By holding out advantages -showing weakness- to him, he can cause the enemy to approach of his own accord; or, by inflicting damage, he can make it impossible for the enemy to draw near.

Whoever is first -to act-with -active or passive Aggression- in the field and awaits the coming of the enemy, will be fresh for the fight; whoever is second in the field and has to hasten to battle - will arrive exhausted.
Patience is a virtue in poker, more so in cash games than tournament, however,

“In a balance of mutual terror, whoever ACTS FIRST has the ADVANTAGE!"
Numerical weakness - lack of chips - comes from having to prepare against possible attacks. Numerical strength -many chips-, (by) compelling our adversary to make these preparations against us.
If we are able thus to attack an inferior force with a superior one, our opponents will be in dire straits.
Do not repeat the tactics which have gained you one victory, but let your methods be regulated by the infinite variety of circumstances -Randomness and Deciet- .

"Water shapes its course according to the nature of the ground over which it flows"; the soldier works out his victory in relation to the foe whom he is facing.
Therefore, just as water retains no constant shape, so in warfare there are no constant conditions. He who can modify his tactics -Randomness- in relation to his opponent and thereby succeed in winning, may be called a heaven-born captain.

So, Limping is a weakness than can mask strength.