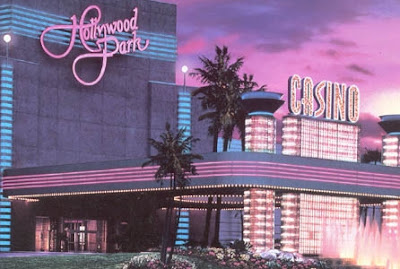 OK, now the Racetrack is gone, but the casino is still there and going thru some type of transformation. Haven't been there since the racetrack closed, so I'll have to update this if and when I go back.

The tournaments there were mostly based on LUCK, not really too much skill involved. In other words, this tournament was not “Kessler Approved.” Then again, none of the tournament anywhere were. Allen "Chainsaw" Kessler is a Team Pro for Ivey Poker. He is considered one of the most consistent live poker players with dozens of cashes and numerous final table finishes.

Kessler has become a voice for players, demanding more chips, more play, extra levels, and more. Providing further evidence that his opinions on tournament structures are valued, the fledgling Mid-States Poker Tour went as far as to Kessler out for input and now advertises that its structures are “Chainsaw Approved.”

This was a crap shoot.
But I actually won a couple of them and finished in the money a few times.

Patience vs Speed and Utility

Low Patience Factor makes it a fast tournament and Low Utility limits your skill.
In an aggressive game, the teaser 1st level may give you one or two hands to try to make a good play. After the 1st level you are down to 30 or less Big Blinds if you haven't doubled up. Starting the 3rd level you are down to one or two playable hands! The Minefield started at Level 5.
Good Luck, because that's what you need to make it far in this crap shoot. 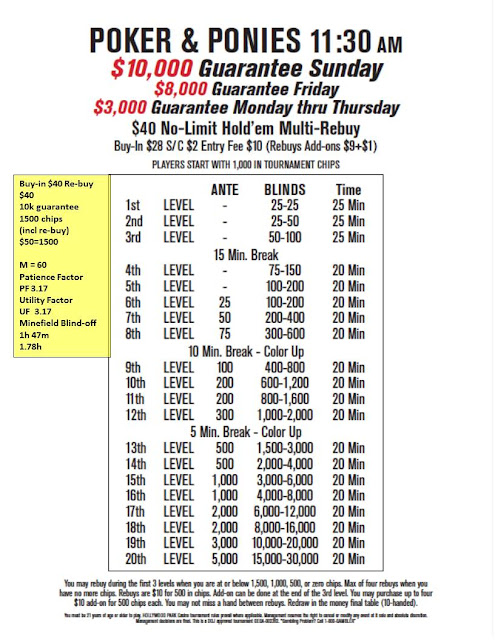 The poker room at Hollywood Park Casino has made some great changes since the racetrack was torn down. Looking for greater games and tournaments yet to come.