Bluff or Semi-Bluff in No Limit Holdem? (pt 3) 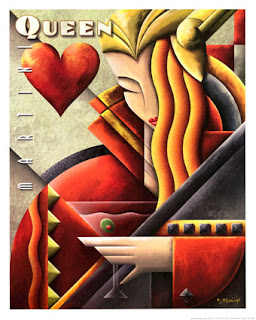 “Bluffing is a nice word for lying. The cards are going to even out in the end. In poker, the one who lies the best wins.” Chris Anderson

(Part 1) (Part 2)
Bluffing according to the flop

Most poker books say that players miss their hand on the flop. It's more likely that someone may have hit bottom pair or even more likely that a few people are on some kind of draw. Bluffing to represent a hand is easier as the lack of betting or weak betting progresses toward the button. Also the texture of the board may give someone the opportunity to represent a hand that may have missed most players.

Flops without an Ace

There is an 87% chance that at least one person at a full table has an Ace and a 76% chance that two players at a full table have an Ace. Actually there is an 87% chance that at least one person has any card you can name and 76% that two players have the same card. That being said, the lack of an Ace on the flop should mean that at least one person still in the hand has an Ace, as an overcard, because many players can not fold any Ace. As the betting moves around from early position players to late position players, a bluff can be represented that someone has paired the board and may have the Ace kicker. A single broadway card, King, Queen, Jack or Ten, can also be represented as many good players will already have mucked hands with high cards and low kickers. When the flop comes and it's 3 cards lower than a 10, if the opponent checks and you check, he is probably thinking you have an Ace, King, or Queen. If one comes, you should bet, even if you have low cards, if you think he will fold often enough for you to win.

Flops with an Ace

Knowing that there is an 87% chance that at least one person is holding an Ace and that there is a 76% chance that two people may have an Ace, as bets progress around the table toward the button, the lack of a bet gives more of an opportunity to represent the Ace that didn't hit someone's hand. Most good players aren't going to slow play even AK when the Ace hits, because there is that 76% chance someone else has an Ace and now may have 2 pair or an Ace high flush or straight draw. Everyone that has read any good poker book know the danger of allowing someone on a draw to get a free card, or even a cheap card, so there should be some betting going on, even a bluff.

Flops with a pair or better

There is only about a 2% chance that someone hit a set on the flop. Someone who did hit the set, may be slow playing the set, depending on how high it is and where they are in the betting sequence. Early position players are more likely to have hit a high set than a low set, so it's more likely they might slow play it. It's not likely that an early position player would represent a set by slow playing, more likely they could make an large bet to represent a bluff, if they have lots of chips. As the betting sequence moves around to the button, the lack of betting or weak bets could give someone the opportunity to represent the set.

There is less than a 1% chance that someone hit a straight or flush on the flop, this makes slow playing a made hand the optimal choice, unless someone has the low end. Here, a check raise, could be a good bluff against poor or weak players, or even good players if the bluff is made by a good player. Poor, weak, and tight players are not likely to make a check raise as a bluff.

A flop with trips on the board, meaning someone may have quads, will usually mean everyone, including the person with quads, is checking or making the minimum bet and only calling. It's more likely that the bets will occur on the turn and river if someone has and Ace or a full house. Probably the one hand that shouldn't have a bluff going, but if you have enough chips and the betting checks to the river, a bluff could be made.

Since everyone plays the Broadway cards, it's likely someone hit something. The bluff can be made when someone makes a weak bet, suggesting a hand that can be beat. If there is no Ace on the board, an Ace can easily be represented to suggest the Nut Straight. This is one of the most dangerous bluffs to be made because the board is ripe for a Full House.

Flops with 3 of the same suit

It's about 500 to 1 that someone will hit the flush on the flop. Playing for the flush draw with anything but the Nuts is dangerous, but that's where the bluff comes in. 3 suited cards on the flop is so scary that most bets will usually be minimal, except by the Nut draws. That's where a raise or check raise could win the pot before the turn.

Aggression Factors (from I Hate Bluffing)

3 = Maniac or Mental Midget (MM) How many maniacs are too many at a table?

Generally the easiest to bluff, but the one you have to give in to if they raise back and sometimes if they even call. Weak tight players are not likely to continue with the hand if they are challenged. Calling Station players have to be bet off the hand with a big bet, if they call, you are going to have to make another large bet in the hopes the Calling Station will fold. Tight players play a tighter range of cards, so bluffing is actually easier, but tight players are easier to bluff. Don't go overboard on bluffing, you still have to pick your spots. Pure bluffs can be profitable against tight player, but have to be abandoned if called or raised. You will usually only be called by players that have a top hand. Aggressive players will be able to steal the blinds, but lose more when they have a good, but not great, hand. Don't play as many drawing hands agains tight players.