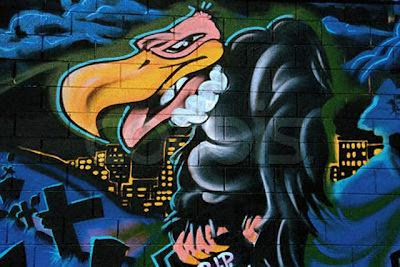 Looking for Road Kill: Dead Money
Bum Hunting is looking for weak players in cash games, preferable heads-up games. I prefer to keep track of Mental Midgets. I think it's more profitable. Some extreme bum hunters just start a table and wait for the fish to come. Some will open several heads-up tables in the hopes that a fish will jump in. If you can keep good records, it may be better to join a full table where there are several fish. I like to do this with Mental Midgets at a loose table. There are sometimes several Mental Midgets who will go all-in pre-flop with marginal hands. They usually don't last long, because they do this from any position. After they have reloaded a couple of times they settle down a little and you have a good table with several fish waiting to be hooked, or trapped.

There are some players who would like to see some changes at poker sites. One suggestion came from a twoplustwo poker forum.

"Here are 2 simple/reasonable changes (poker sites) can make, either of these will solve the issue, but I'm in favor of both.
1. Allow players to change their screen name. This will make bum hunting much harder to do. No more can someone just look you up on table ratings and deny your action.
2. Only allow a small number of tables with 1 player sitting at them. Also, if a player sits down and you deny their action, you should be booted from the table instantly. If you don't want their action, you lose your table."

Regarding the first suggestion, many players like their screen name too much to change it, so it's not likely to be workable. The second one makes better since both from the bum hunter side and the fish side. If a bum hunter opens a table, any who sit can play, and if a fish opens one, the first bum hunter that finds it, gets first crack. What would really make it better would be to have a minimum of 10 to 20 big blinds set aside so a player can't just play one hand and leave.