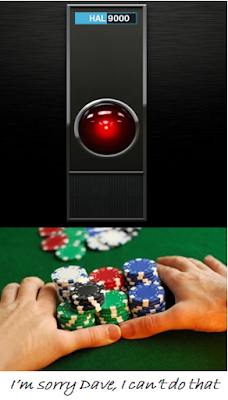 Rivers Casino in Pittsburgh
The Game. Texes Hold'em No Limit - Heads Up
14 days and 80,000 hands of no-limit Texas hold ‘em

Its name, Claudico, means "I Limp" in Latin, a reference to the fact that it does not mind calling a bet in a fashion that many professional poker players believe to be weak and foolish.

The bot risked all its available chips on one hand while holding a 10 and a 5 of different suits — very bad cards — and bet big on another hand when the chances that its opponent could make a full house or a flush were great.

"It has a very sophisticated model," said Sandholm, the lead developer. "It just doesn't know that it's bluffing because it doesn't know the word 'bluff.'"
Unlike professionals, Claudico did not track its opponents' strategies. And its own game seemed random. For Brown and the other programmers, poker is the measuring stick, but not the goal.

They are really aiming to advance the field of artificial intelligence to fight cyberwars, perform negotiations and plan medical treatments, among other tasks that require complex decision-making with limited information.

Hold 'em poker, in this regard, offers a different challenge than chess or "Jeopardy!" because two cards are dealt facedown to each player; an opponent always has a large chunk of information missing. Five cards are then dealt face up for both players to use in forming their best potential poker hand.

The players beat the computer, but not by much.

Humans Out-Play an AI at Texas Hold ‘Em—For Now
http://www.wired.com/2015/05/humans-play-ai-texas-hold-em-now/
Claudico can only get close to Nash Equilibrium; it doesn’t react to the specific tendencies of individual opponents. The machine instead approximates ideal rational play, no matter the circumstances.

So the professionals adopted a constantly changing, exploitative strategy designed to locate and attack specific quirks in Claudico’s play. For example, it couldn’t process card removal—the way in which the cards in one’s own hand affect the likelihood of another player having specific card combinations. Les says that Claudico didn't factor that in, so the humans could tell when the AI was making big bets to disguise a weak hand, trying to force its opponent to fold.

That tell meant Les and his colleagues could pick off gigantic bluffs on the river by calculating that their hole cards made it unlikely Claudico had a hand as big as its bet would suggest. “It was writing a check it can’t quite cash,” says Les.

Claudico couldn't adjust to unusual bet sizing. That’s a big problem; it meant that the AI didn't always responding correctly. The humans capitalized on that. “Bjorn started using the most unusual bet sizes,” Les says. “He was falling in between the known sizes a lot, and was causing Claudico to have difficulties.”

When the final hand of the competition was completed, the players had wagered around $170 million (theoretically), and the team of humans professionals was ahead $732,713.

“While humans may still be ahead for now,” says Bowling, “it’s really just the beginning of the end.”

Poker has become one of the best ways to quantify the true power computers have in a way that is tangibly testable against a human opponent.

“Poker is now a benchmark for artificial intelligence research, just as chess once was,” said Sandholm. “It’s a game of exceeding complexity that requires a machine to make decisions based on incomplete and often misleading information, thanks to bluffing, slow play, and other decoys. And to win, the machine has to outsmart its human opponents.”


This was Heads UP poker!
How would it do at a full table or short handed 6 max or even with just two other players?

(Update)
OK, they did it again in February 2017. In the previous matchup, the pros won. The new computer named "Libratus", designed by Carnegie Mellon University, the same designers that built "Claudico". This time the computer beat (badly) 4 other professional poker players out of 1.8 million dollars (not real money though). Again, heads-up Texas Hold'em.


Let me know when it wins the main event at the WSOP against thousands of poker players.