Bluff or Semi-Bluff in No Limit Holdem? (pt 2) 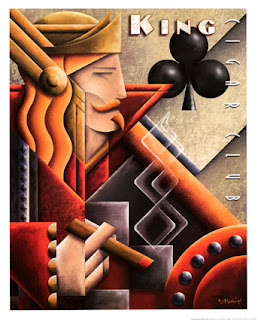 Dan Harrington’s Law on Bluffing: "The probability someone is bluffing when he shoves a big bet into the pot is at least 10%", (until the final table)
(back to Part 1)

First of all, you should rarely bluff pre-flop, unless you are one of the blinds and only one other player has bet. The only other times to consider a bluff would be at the final table or heads up. Even AA should never be slow played pre-flop, especially since there is usually at least one loose aggressive player at a table and more than one selective aggressive player. It's when there are also one or more poor players that will hold on to top hands all the way to the river that someone with AA needs to make a reasonable bet or raise. Good players aren't going to gamble pre-flop against a full table, unless they are short stacked. AA only wins about 88% of the time heads up and against a full table it only wins about 36% of the time anyway. I love it when Mental Midgets go All-in, pre-flop, on the first hand. Even the Mental Midgets that win, because other Mental Midgets follow suit, tend not to last very long.

Loose tables tend to have many poor players so a good player is rarely going to bluff at a loose table. In loose games, tighten up on semi-bluffs and losen up on legitimate hands. In a loose game, play more drawing hands and do not play loose with marginal hands.

Tight tables tend to have more good players, so bluffing is actually easier, but good players are going to pick and choose the best time to bluff. Good players are not going to go overboard on bluffing, but there will be better bluffs going on. Pure bluffs can be profitable at a tight table, but have to be abandoned if called or raised. You will usually only be called by players that have a top hand at a tight table. Aggressive players will be able to steal the blinds, but lose more when they have a good, but not great, hand. Don't play as many drawing hands in tight games.

Early position hands are just too vulnerable, even with good hands, to consider a semi-bluff, unless the table is weak and/or tight. That being said, the opportunity exists to represent a top hand against weak players and/or a tight table. Accepting that the range of hands for early position is mostly the top 5 to 6 hands, you might be able to consider a semi-bluff with some of the other top 10 to 15 hands.

First of all, you have to Semi-bluff less often if you are the last to act and have to opportunity to get a free card, because it's still about the Semi-bluff. Secondly, someone could be sandbagging. It's all about how many are still in the hand and the strength of their bets. Against weak bets, it's a good place to make a play, but analyze who is making the bet. Against weak timid players, it's a good place to test their metal. Against good players, it's representing a hand that can beat the board. With 3 or more players still in the hand, someone is sure to have a good hand, but how good. Late position is probably the best place to try Arnold Snyder's "Rochambeau" style or Blair Rodman and Lee Nelson's "Kill Phil" style. Although the button is the place where poor players try to steal the blinds, the cutoff seat just before it and the real stealing position just before the cutoff position, are where the good player try to steal the blinds and/or take down the pot.